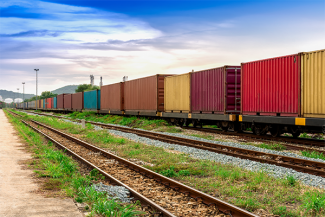 From the West Coast to the East Coast, America runs one of the safest, most extensive and reliable railroad systems in the world. The 140,000-mile network is owned and operated by 600 freight rail lines, including seven Class I railroad companies. Together, these rail lines earned nearly $74 billion in revenue in 2017 — Class I railroads earned $70 billion of that total. From agricultural products to construction materials and household goods to clothing and shoes, America’s rail system is an efficient way to move freight across the United States. Find out more about the country’s major rail companies, how many track miles they operate and the type of freight they carry.

Seven Class I railroads operate in 44 states, the District of Columbia, and parts of Canada and Mexico. A Class I railroad company is currently defined as rail lines with a 2016 revenue of at least $447.6 million. Together, they account for 69 percent of all track mileage and employ 90 percent of U.S. railroad workers. The following list provides additional information on each Class I network — they are in order from largest to smallest in terms of track miles:

Intermodal shipping incorporates more than one mode of transportation (e.g., trains and trucks) to cover more ground in a timely manner. It’s considered the rail industry’s fastest-growing sector, accounting for roughly 23 percent of America’s rail freight revenue. The Association of American Railroads reported record-setting intermodal activity in August 2017, which contributed to the year’s total intermodal traffic increase of 3.9 percent. By using this method of transportation, shippers can experience a reliable, cost-efficient, flexible, safe and environmentally friendly way to transport goods long distance. To learn more, read our blog post on the benefits on intermodal shipping.

With a strategic advantage in intermodal transportation, ArcBest® combines truck and rail services to ship freight moving distances of 700 miles or more. Through our partnerships with all Class I railroads, we can provide intermodal customers with reduced costs, more access to capacity, transit times similar to over the road transport and increased visibility. For more information, call 800-610-5544 or email customersolutions@arcb.com.