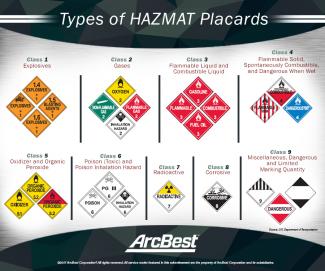 Hazardous material signs: what you need to know

Have you ever noticed diamond-shaped signs on the back or sides of a semi-truck trailer and wondered what they are and why they’re there? They’re called HAZMAT placards, and they provide details about the kind of cargo a truck is carrying.

The United States Department of Transportation (DOT) also requires carriers to display these signs when moving hazardous goods because they inform emergency responders of what substances are involved in case of an accident.

More than two dozen truck placards are used to represent dangerous goods, and you can determine what a truck is carrying by the specific details on the sign.

Here’s what each component means: 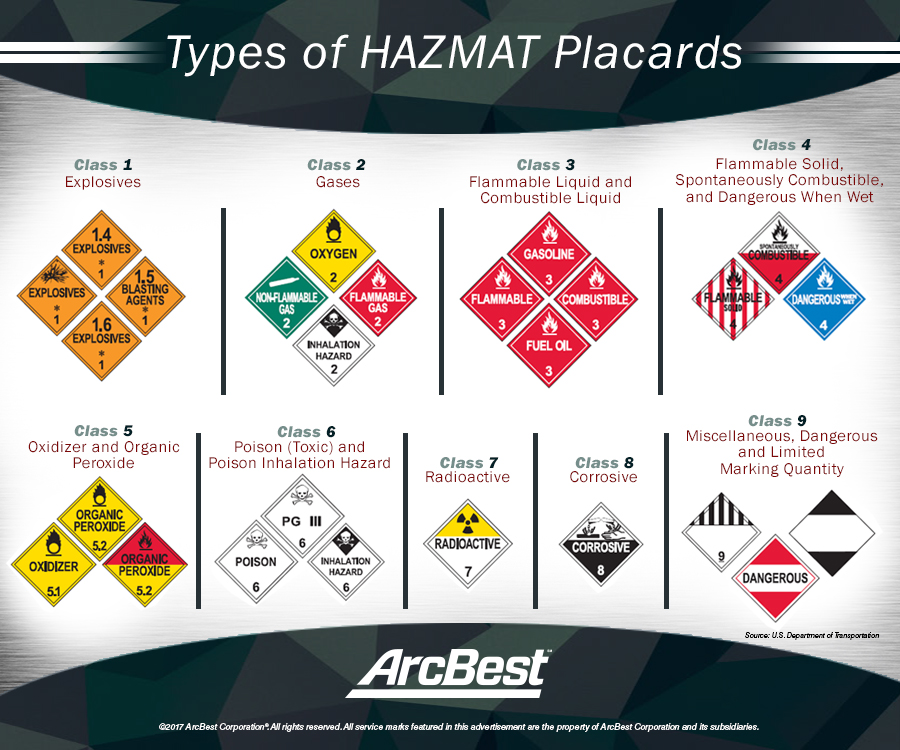 Numbers 1-9 represent the different hazardous classes and their divisions (class numbers are located at the bottom of the sign and division numbers are in the middle):

Four-digit numbers ranging from 0004-3534 are called United Nations (UN) numbers. They help identify hazardous international cargo traveling in the United States. Goods that aren’t classified or regulated by the United Nations receive North American (NA) numbers. These four-digit numbers range from 8000-9279 and are assigned by the DOT. All UN and NA placards come with an identifier that helps shippers determine the cargo’s class, division and compatibility group.

On some signs, you may see the letters A-S. These compatibility letters help shippers and carriers know which explosives can be loaded together onto a trailer.

One of the easiest ways to identify hazmat placards, other than the class numbers, is by the color (along with the words and graphics on each sign):

Orange
Orange represents explosive materials which can include products like dynamite, fireworks and ammunition. These signs typically have the words explosives or blasting agents on them and a graphic indicating something blowing up. They’ll also have the number 1 to indicate the class.

Red
Red is for flammable goods like gasoline, rubbing alcohol, paint and acetone, which can fall into Classes 2 or 3. These placards feature a flame image and usually have the words flammable, gasoline, combustible or fuel oil.

Green
If the truck has a green sign, it’s transporting nonflammable substances like compressed and liquefied gases. You’ll see the word nonflammable gas, an image of a gas canister and the number 2.

Yellow
Yellow indicates oxidizers — substances, that when mixed with oxygen, are likely to combust (Classes 2 or 5). Common oxidizers include ammonium nitrate, potassium nitrate, halogens and nitric acid. These signs have oxygen written on them and a graphic of an “O” with flames.

White
White indicates poisonous and biohazardous substances like dyes, acids, aerosols and medical waste. For toxic materials, the sign will be labeled poison, PG III (PG = packing group) or inhalation hazard with a skull-and-crossbones image. For biohazards, the placard will say infectious substance and have a biohazard symbol (three circles overlapping one center circle). These types of materials can fall into Classes 2 or 6.

Blue
Blue represents goods that are dangerous when wet — meaning when these materials meet water, they can become flammable. Examples include sodium, calcium and potassium. You’ll see dangerous when wet, an image of a flame and the number 4 on these placards.

Red and white
If you see a sign that’s half red and half white with spontaneously combustible written on it, a flame graphic and the number 4, that means there are substances present that may ignite when exposed to air. This can include things like aluminum and lithium alkyls or white phosphorous.

Yellow and white
Yellow and white represent radioactive substances that are often found in medical equipment. You’ll see the word radioactive, the radiation symbol of three blades surrounding a small circle, and the number 7.

White and black
Half white and half black signifies corrosive materials that can irritate and harm the skin. Examples include batteries, hydrochloric acid, sulfuric acid and sodium hydroxide. These signs say corrosive, show substances spilling onto hands, and have the number 8.

White with black stripes
A white sign with black vertical stripes at the top and the number 9 at the bottom signals miscellaneous dangerous goods. This includes environmentally hazardous substances that don’t fall into a specific class like asbestos and dry ice.

Questions you may have about hazmat placards and freight

Is it safe to drive near a truck carrying hazmat freight?

While driving near a truck carrying dangerous goods isn’t unsafe unless an accident has occurred, it’s always best to keep a safe distance and pass cautiously when possible. The Federal Motor Carrier Safety Association (FMCSA) has strict regulations in place for carriers transporting hazmat freight to ensure public safety when these goods are on the road. Some of these rules require carriers to:

Which hazmat class is the most dangerous?

Hazmat Class 1 is often thought to be the most hazardous because the goods are explosive. However, all classes contain dangerous materials that you should be aware of and cautious around.

Why are there multiple placards on a truck?

The DOT requires carriers to display at least four placards in locations where the view isn’t obstructed. Some carriers also place two extra signs on either side of the truck cab for additional visibility.

Can carriers transport multiple types of dangerous goods in one truck?

Yes. A truck displaying multiple colors of placards means it’s transporting more than one type and/or class of hazmat freight. To ensure there are no harmful reactions, many restrictions apply when commingling different kinds of dangerous goods.

Now that you’re aware of why hazmat placards are critical and how to identify what is being transported, share your knowledge. Understanding and identifying these signs can make our roadways safer when dangerous goods are present.

Posted in:
Safety and Security