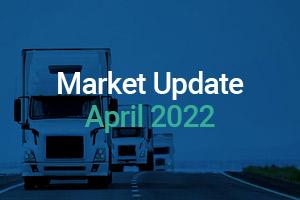 Is the market facing a tough summer?

In our March Market Update, we looked at several headwinds that could work against freight demand throughout the remainder of 2022. The highest levels of inflation in 40 years, increasing interest rates, and consumer spending habits shifting towards services, to name a few. Inflation, according to the Consumer Price Index, rose 8.6% YoY in March. The Core Consumer Price Index, which excludes volatile food and energy prices, stayed flat from February to March, providing hope that inflation may be near its peak. 30-year mortgage rates are at their highest levels since 2010, and the Fed is expected to raise interest rates multiple times this year — including the 0.50% increase they announced at their May 4 meeting. Consumer spending has shifted away from goods and towards services 3 of the past 4 months and the trend is expected to continue throughout the summer.

Recent data is beginning to suggest that the trucking market is feeling the effects of these headwinds. The Evercore ISI Trucking Survey declined in April 2022 to its lowest level since February 2021, despite still being at a relatively high level. FreightWave’s Sonar Outbound Tender Rejection Index has fallen to its lowest level since June 2020 (Figure 1). This is a measure of the level of outbound tenders that are being rejected by carriers and the index tends to fall as capacity loosens or demand declines. After increasing for nearly 20 consecutive months, national average spot van rates have now decreased for 3 consecutive months as capacity is improving and demand is falling.

Additionally, Covid-19 lockdowns in China are happening again. Nearly 400 million people are estimated to be under lockdown, including Shanghai, the world’s largest port, and Guangzhou, the world’s fourth-largest port. Lockdowns in China are incredibly strict, making it difficult for freight to continue to move in these areas. At a news conference on May 16, Shanghai officials announced a phased reopening plan, with the goal of fully restarting factories in June. Changes may come as this situation continues to develop.

This could lead to a negative impact on global supply chains, including within the United States. Chinese officials have announced that factories operating within “critical industries” will be allowed to reopen under certain guidelines in an effort to ease the supply chain disruptions. However, the inability of materials to be moved into China will make it difficult for these manufacturers to operate at any significant level of capacity due to shortages of raw materials. This could lead to a backlog of orders even into this year’s holiday season.

Freight has not been able to reliably move out of China either and ports are becoming more backlogged. The United States is already feeling the effects of the inability of freight to move out of China. Sonar’s Outbound Ocean TEUs Volume Index has fallen nearly 21% since its high in early April 2022 (Figure 2). There did appear to be some improvement in late April, possibly due to China’s easing of restrictions for certain critical industries, but the future is still highly uncertain.

Once the lockdowns end, that backlog will likely shift to ports in the United States as all the freight that is piling up in China begins to move all at once. Based on the current expectations of when the lockdowns will end, it is possible that this surge in backlogged freight will hit the supply chain during peak season and cause further disruptions.

It is incredibly difficult to know what will happen in our current economic environment, especially regarding the impacts of the Covid-19 lockdowns in China. Shippers need to be prepared for any situation that might arise in these unpredictable times. ArcBest is well positioned with solutions to fit any need, whatever the future holds. As a logistics company with owned assets, we’re able to offer solutions through ABF Freight® and our Panther Premium Logistics® fleet in addition to our network of more than 80,000 capacity providers. With a combination of advanced supply chain technology and an experienced customer solutions team, ArcBest is equipped to solve even the toughest logistics problems.