The Logistics of Road Tolls: How Tolling Impacts the Transportation Industry

The state of U.S. infrastructure is frequently discussed in social and political news, often paired with terms like “declining,” “crumbling” and even “failing.” Since fiscal year 2008, surface infrastructure has been underfunded, and the revenue gap is continuing to grow1. In 2017, there was an $836 billion backlog in the funds needed to repair roads and bridges — structures that have received “D” and “C+” ratings from the American Society of Civil Engineers since 20132.

With more than 70 percent of annual freight tonnage in the U.S. traveling via roads3, it’s clear why financing their construction and maintenance is an important topic for the transportation industry. Resolving issues like slow transit times and unsafe roadways is critical, but any proposed solution must be thoroughly examined to ensure its drawbacks don’t outweigh its benefits.

How Roads are Funded 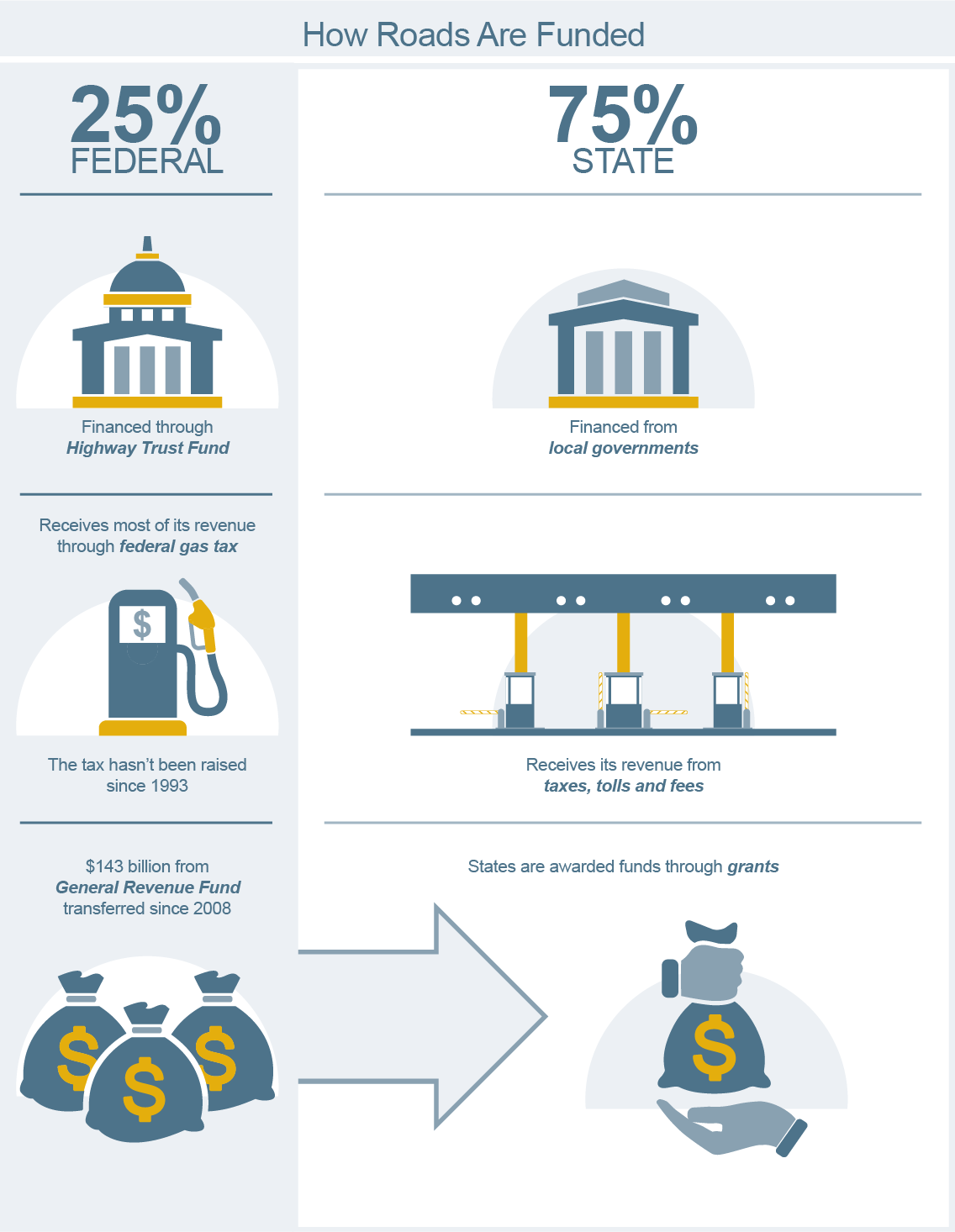 The federal government provides 25 percent of public spending on roads, with the other 75 percent left to the states4. Federal funds are primarily financed through the Highway Trust Fund, which gets most of its revenue through the federal gas tax. States and local governments use a combination of taxes, tolls and fees5. Highway spending has been sustained in recent years with transfers from general revenues to the Highway Trust Fund, but there still isn’t a long-term fix.

Because the federal gasoline tax generates such a large portion of the Highway Trust Fund, it’s no surprise that one suggestion is to raise it. The tax hasn’t been raised since 1993 and is not indexed for inflation. This means that as inflation increases, the less value the gas tax has. While the higher rate would certainly help funding efforts, there is some concern that the predicted increase in electric vehicle sales would decrease profits. According to the Institute for Energy Research, if electric vehicles accounted for 20 percent of new car sales by 2030, revenue from the gas tax would fall by $3 billion6. Adding extra fees for electric vehicles could mitigate that loss, but other steps may have to be taken as well. Whether or not the initiative happens, it’s possible that a tax increase alone would not be enough to solve the problem.

Are Tolls the Solution?

Both the Trump and Obama administrations proposed a change in federal law to allow states to add tolls to existing highways. States can currently add fees to roads, bridges and tunnels created and maintained without federal assistance, but there is some belief that expanding the rule to federal-aid structures would help generate the revenue needed to repair damage.

Proponents of road tolls cite reasons such as reduced driving times, less congestion, and faster maintenance and construction. But how realistic are those goals and how would they affect industries that rely on roads for everyday business?

Questions Raised for the Transportation Industry

A study conducted by the Texas A&M Transportation Institute found that many of the purported benefits of toll roads don’t necessarily apply to the trucking industry. For example, the higher speed limits typically seen on tolled surfaces can have a negative impact on trucks that are most efficient in the 62-64 miles per hour range7. Similarly, the study found that toll rates for trucks can be three to six times more expensive than they are for passenger vehicles. These added costs are just part of the potential implications. Additional fees and results within different industry sectors must also be considered. Key questions include: 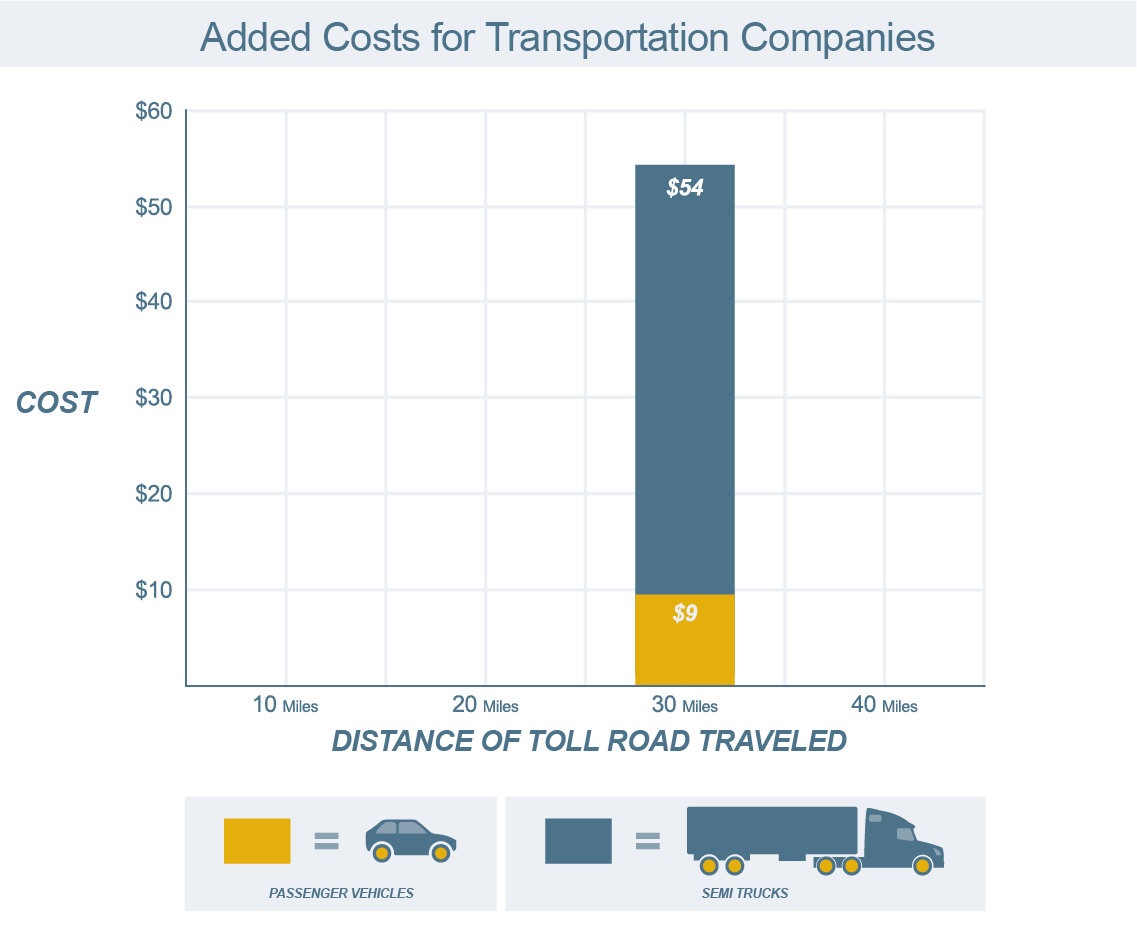 While tolling is present in several states, it can be difficult to imagine on a larger scale. To get an idea of how national implementation may work, we can look at countries with established tolling systems.

Tolling in Other Countries

Several countries in the European Union (EU) have toll systems in place for commercial vehicles. Germany and Spain are two of them — each using a distinct approach due to their differences in infrastructure and freight volume. Because traffic conditions, roadway construction and shipment frequency vary across the U.S., the processes in these countries can provide a good representation of how individual states could handle tolling. By then looking at the EU as a whole, we can begin to understand how it might work when freight moves across America. 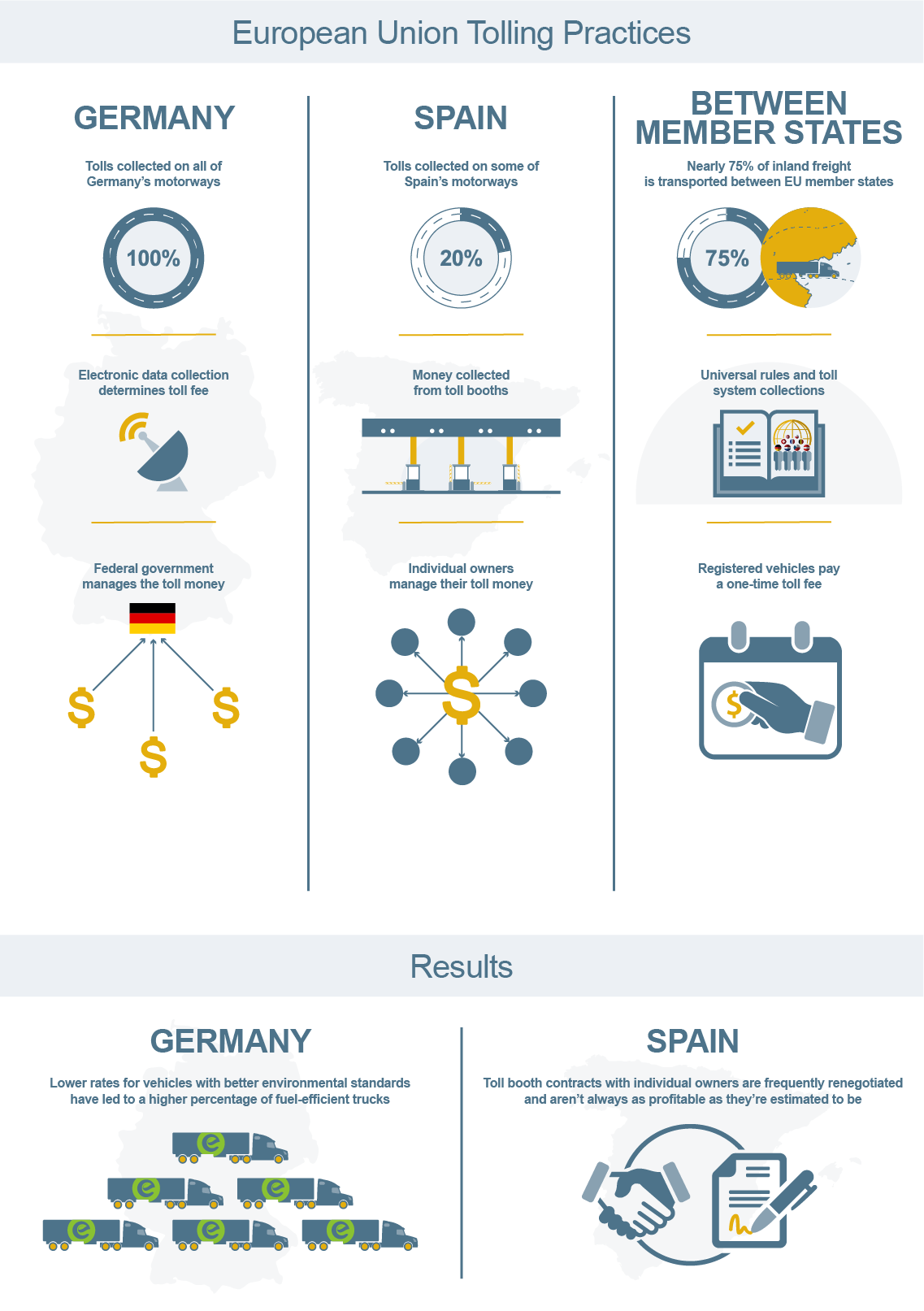 Approximately 3 billion metric tons8 (or 6 trillion pounds) of freight travels across Germany’s roads each year. Because the highway system plays such an integral part in the movement of goods (both within Germany and to other parts of the EU), issues such as congestion, pollution and general road deterioration are big concerns. The HGV toll addresses these issues by establishing funding for repair and providing benefits to transportation companies that invest in efficient equipment and solutions10.

The LKW-Maut currently applies to all of the country’s motorways and most of its federal trunk roads, with the fee extending to all trunk roads in July 20189. Once a vehicle is registered with the tolling authority, an onboard unit records its environmental standards, its location while driving and whether it’s towing a trailer. This information and the distance the truck travels is used to determine the total charge. All funds generated from the HGV toll go toward roads, with 84 percent allocated for investments and maintenance10.

Spain’s tolling system is less extensive than Germany’s, with only 20 percent of the motorway included in the program. The nation’s location and size are significant reasons for this comparatively low percentage — heavy goods vehicles typically have to travel farther distances on fewer roads to get to core European markets10. These factors are also why tolls are primarily collected through traditional booths and express lane passes rather than the satellite system Germany uses.

Another difference in Spain’s operation is how the work is divided. In Germany, the tolling authority collects the payments and the federal government manages their use. Toll roads in Spain are under different ownership. Each contract recipient is responsible for maintenance and construction in return for the right to collect tolls11.

Nearly 75 percent of inland freight in the EU is transported between Member States rather than within the borders of one country12. But with independent tolling practices and differing labor regulations, establishing a system for cross-border transit resulted in a few issues. The EU had to develop common rules for driving times and rest periods (similar to the Hours of Service regulations in the U.S.), change vehicle weight and dimension restrictions, and create a universal collection system for tolls.

With those addressed, freight can now travel across borders without issue. Registered vehicles pay a single fee to pass through tolls in Europe instead of individual charges for each road. Some regions may have additional tolls for environmental damage12.

Results in the EU

Germany and Spain have seen both successes and difficulties from their tolling systems. Germany’s lower rates for vehicles with better environmental standards has led to a higher percentage of fuel-efficient trucks10. However, infrastructure deterioration hasn’t stopped. This is largely due to the fact that funds from the general budget were reduced after the introduction of the LKW-Maut10.

In Spain, concession contracts are frequently renegotiated and aren’t always as profitable as they’re estimated to be. On average, actual traffic was less than 50 percent of the traffic predicted11. Its Logistics Performance Index (LPI) has improved though, with its productivity now considered equal to other large countries10.

Choosing to take or avoid a toll road is typically up to the driver and often depends on the incentive it offers. A study on routing behavior found that this decision can change on a daily basis depending on traffic conditions and shipment urgency. For example, one driver took a tolled route during a weekday in the morning (a peak traffic time) and the free road for a similar trip on a Saturday13. Increasing the number of tolled roads may make them harder to avoid in some regions, but the route chosen will most likely depend on the type of shipment. Results in different areas of the industry can be theorized based on EU examples and current U.S. data. 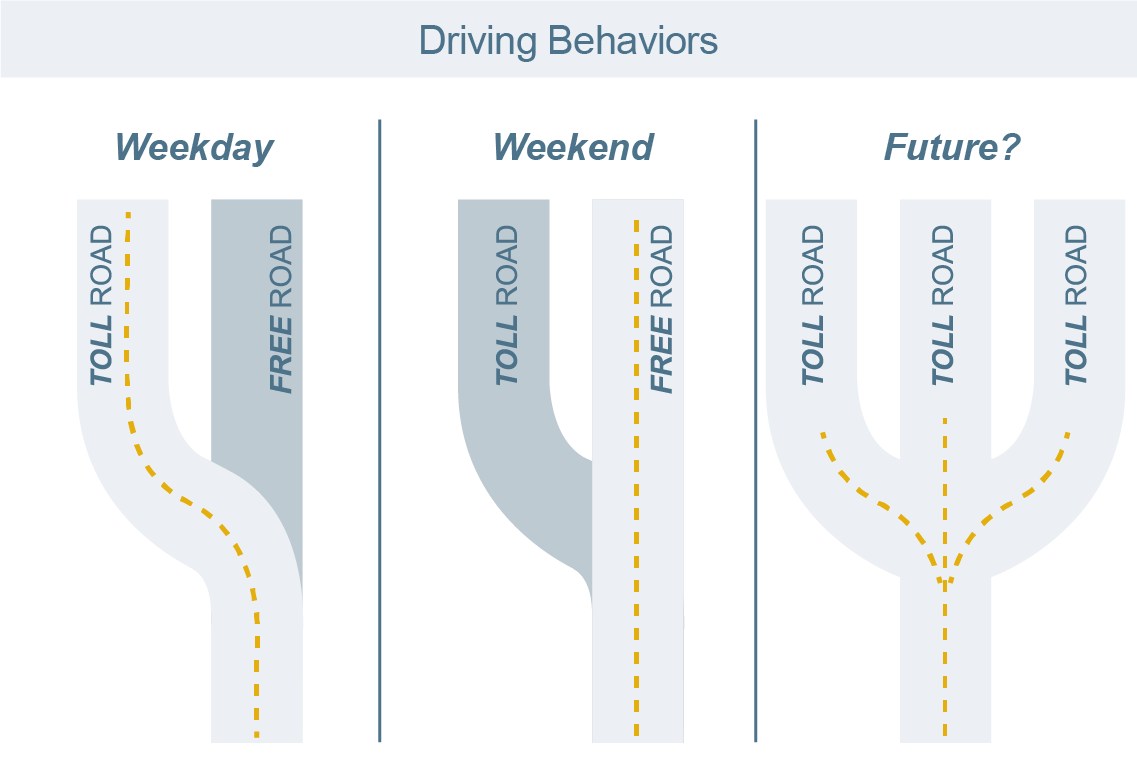 Similar to Germany and Spain, densely populated regions of the country may see only a marginal increase in intermodal shipments while more remote areas could begin to rely on that mode more often. Expedite carriers might rely more heavily on tolled routes in order to avoid congestion and delays, but the time savings would have to be thoroughly reviewed. In the routing choice study, the average value of travel time savings was $44.20 per hour13 — an amount that can quickly add up for carriers.

The Future of Tolling in the U.S.

Switching to a user-based rather than tax-based system for funding roads presents many questions and concerns, leading some organizations to suggest alternatives. The American Transportation Research Institute (ATRI) released a report in November 2017 that recommends fuel tax increases instead of tolling14. The American Society of Civil Engineers also has recommended this, adding the idea of “tackling congestion through policies and technologies that maximize the capacity of the existing road network2.”

Regardless of what solution is implemented, the transportation and logistics industry needs to be prepared. As the ATRI implies, doing nothing is no longer an option, especially because “growing traffic congestion and freight bottlenecks now cost the industry more than $63 billion annually14.” Finding an answer is important for our industry and the country as a whole, we just need to be sure we’re ready for the change.